Out of Zone Case Study

Figure 1. TVD vs MD plot of the heel of the well, where several stages were landed below the target zone

Completing unconventional wells requires the successful, tandem execution of many complex operations, from design to execution of landing zones, stimulation and cluster/stage design. Any single sub-optimal element in design or execution may result is a poorly producing well. Chief among the steps necessary for wells are the determination of and successful execution of landing the well in zone.

When the lateral of an unconventional well crosses multiple zones, diagnostics are critical in evaluating and comparing the relative productivity of each layer, allowing future wells to land in better rock for improved performance and hydrocarbon recovery from the reservoir.

In this case an operator landed a few of the heel stages in a lower layer than initially desired (Figure 1). They suspected these stages may not be contributing as much or as uniformly to production as the stages landed in-zone. Since they were unable to determine productive clusters by surface production rates alone, they elected to collect enhanced diagnostics to determine where production was coming from across the lateral to correlate production with landing zone.

Because they were interested in cluster level diagnostics and anticipated the out-of-zone clusters may be producing at rates below the threshold of an array spinner, they opted to deploy Z-System® carbon rod – a dip-in fiber optic well intervention system - to acquire distributed acoustic (DAS) and temperature data (DTS) across the lateral for decision making. This approach would allow them to compare the productivity of the clusters along the lateral, evaluating the performance of each layer, and ruling out conclusively whether overall production was weaker or there was a layer-specific performance variation.

The Z-System® was dispatched to the well site, rigged up and the spool of carbon-fiber rod was injected into the well while it was producing. Since the 0.6” OD rod does not choke flow, even in tubing, deferred production was minimized while providing unparalleled acoustic performance compared to more-expensive behind casing fiber. Once deployed across the lateral, DAS and DTS data was collected. Because the rod does not swab or surge the well, the Z-System® is able to capture the most accurate temperature profile, that of undisturbed cluster flow.

The distributed acoustic data is analyzed and a qualitative allocation of production from each cluster is determined, based on the proportional relationship between the flow rate from a cluster and the noise produced. Then, a temperature model, based on the DTS data and constrained by the acoustic analysis, allocates and quantifies production per cluster. 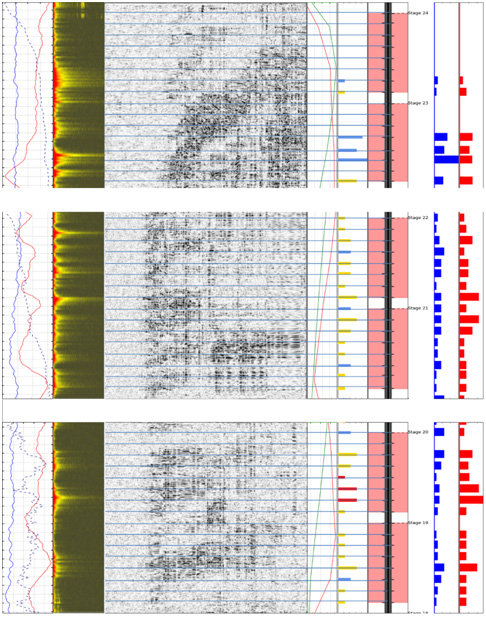 Figure 2. Clusters in stages landed out of zone (upper) indicate poor uniformity and lower productivity compared to clusters landed in the target zone (middle and lower), where more uniform and productive clusters are observed.

Comparative analysis of cluster performance in upper (target) and lower (out-of-target) landing zones across the lateral confirmed the customer’s suspicion of reduced performance in the lower layer, where 30% less production is observed in the lower zone.

However, cluster data and statistical analysis of cluster production across the lateral reveals a specific target zone where the most production per cluster is observed. This discovery of a new, ideal landing zone at the between the upper and lower layer is driving optimization of their completion design and production performance improvement on subsequent wells.